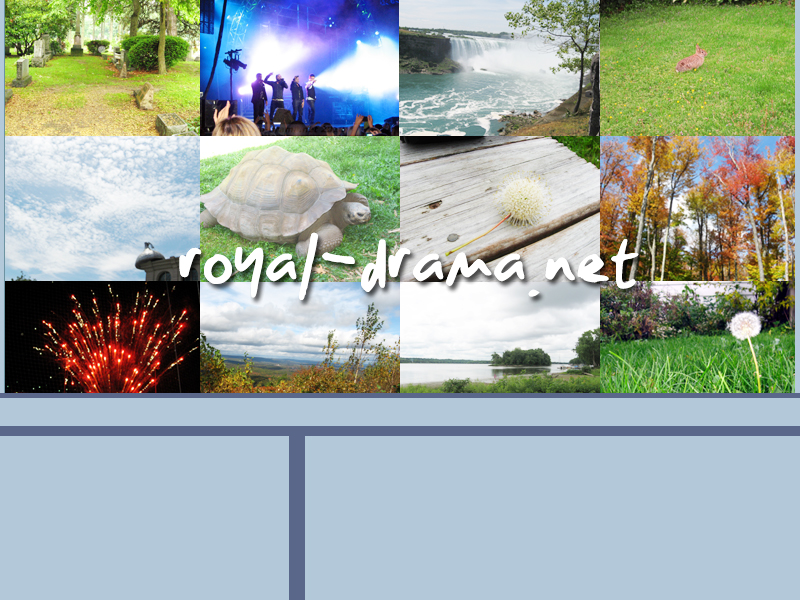 Intro;
Welcome to royal-drama.net! This is the domain of Jamie, a 28 year old female from Ohio, USA. This site was created to host my various projects that I randomly get to urge to create. It was orginally used a personal site but then I got hooked onto Livejournal so I have been blogging there instead. Just a notice, this main part is not updated all of the time. What you'll find here is updates on my websites, fanlistings I've joined, (eventually) my graphics archive, & whatever else I come up with to do.

The following are of my current sub sites and a little bit about them. Click on the buttons to vist them.

Title: She's just my sister
Subject: Mary-Kate & Ashley Olsen's real life relationship fanlisting
Opened: October 17, 2003
A fanlisting about the love they have for each other and their relationship. It was my first fanlisting ever.

Title: Flaming Talent
Subject: Scarlett Pomers fanlisting
Opened: May 11, 2004
Scarlett Pomers plays Kyra Hart in the WB tv series 'Reba'. She has also been on 'Star Trek' & in the movie, 'The Babysitters Club' among other things.

Title: Unbreakable Bond
Subject: Chrissy, Teeny, Roberta & Samantha's from Now & Then relationship fanlisting
Opened: October 18, 2004
I just love this relationship. It's so cute and tight even though they are all different.

Title: Solid Bond
Subject: The book series 'The Baby-sitters Club'
Opened: April 19, 2005
I still love the books, I collect them, I saw the fanlisting was opened and snatched it. :)

Title: America the beautiful
Subject: America Ferrera fanlisting
Opened: November 21, 2006
I've always been impressed by America's acting and she is a confident woman. I was really shocked to see no fanlisting about her so I grabbed it. :)

Title: Favorite Pair
Subject: 24 numberlisting
Opened: Decmeber 29, 2006
24 is my birthdate, my favorite day of the month (I get paid), my favorite driver's number and half my friends were born on this day. I thought a numberlisting would be a fun different thing to have.

Title: Munchkin Princess
Subject: Michelle Tanner from Full House
Opened: July 13, 2007
I am a huge Full House nut and all of the other characters are taken as well as the show. Who doesn't love Michelle? She's adorable and funny so I thought I'd apply.

Title: Never Know
Subject: Episode 6.03, After Life, from Buffy the Vampire Slayer
Opened: May 31, 2008
I loved the whole Btvs universe and this episode is one of my favorites. I love the shock of being risen from the grave & how everyone tries to deal with it in their own different ways.

Title: This is Nice
Subject: Episode 2.13, A-Tisket, A-Tasket, from Gilmore Girls
Adopted: March 21, 2008
I didn't have a GG fanlisting yet, this is my 3rd favorite episode, so I nabbed it. I like how this episode invovles pretty much all the characters so we see a lot of Lane & Sookie, who are my favorites, and some Lukelai interaction.

Title: Want Beer!
Subject: Episode 5.05, Beer Bad, from Buffy the Vampire Slayer
Opened: August 21, 2008
I dare anyone to watch this episode and not be amused.

Title: Smile
Subject: Actress Danielle Fishel
Adopted: June 1st, 2008
I don't know anybody who didn't love Danielle as Topanga on Boy Meets World. She is just adorable (well when she isn't getting herself into trouble that is).

Title: Get out of my shoes
Subject: Episode 3.02, Dead Man's Party, from Buffy the Vampire Slayer
Opened: May 31, 2008
I love episodes that are emotionally packed and this one is just all over the place. I love how it displays Buffy as vunerable and that everyone kind of puts her in her place. Plus one of the funniest lines in the Buffyverse is in this one "Look at my mask,isn't it pretty?! It just raises the dead". Oh Giles!

Title: Super Nice
Subject: Episode 5.06, Family, from Buffy the Vampire Slayer
Opened: May 31, 2008
I loooooove this episode because Tara was in the spotlight for once!! I felt this episode really shaped her character.

Title: Precious
Subject: Episode 5.09, Listening to Fear, from Buffy the Vampire Slayer
Opened: March 17, 2008
This episode is one of the few in the Buffy world that scares the hell out of me.

Title: Fevered Shadows
Subject: Episode 2.18, Killed by Death, from Buffy the Vampire Slayer
Opened: March 21, 2008
I love this episode. It's probably one of the most classifed "lame" episodes but I love it for some reason.

Title: Expressive
Subject: Actress Lori Loughlin
Adopted: June 1st, 2008
Lori is gorgeous and I have loved her in everything I've ever seen her in.

Title: It takes one to know one
Subject: Lucy from I Am Sam
Adopted: February 20, 2008
This role is what made me really respect Dakota as an actress. She is just brilliant in this film and this character amazing.

Title: Rally the troops
Subject: Episode 7.12, Potential, from Buffy the Vampire Slayer
Opened: August 21, 2008
This episode was the turning point in the final season. I found it interesting to see how everyone reacted to Dawn possibly being a potential.

Title: Invisiable
Subject: Episode 7.03, Same time, same place, from Buffy the Vampire Slayer
Opened: August 21, 2008
This episode honestly scares me. It's so effin creepy but yet you can relate to how Willow felt. Plus you gotta love making Dawn "pose".

Title: New Realm
Subject: Episode 5.02, Real Me, from Buffy the Vampire Slayer
Opened: August 21, 2008
I really like Dawn (I know most people hate her) and I really liked how they introduced her in this episode.

Title: Animal Instincts
Subject: Episode 4.06, Wild at Heart, from Buffy the Vampire Slayer
Adopted: June 04, 2009
I really disliked that Oz left but the way this episode was acted was just beautiful.

Title: Winsome
Subject: Ashley Olsen
Adopted: September 08, 2010
I have been a fan of both Olsens since my childhood because I grew up watching Full House. I used to have a fansite for Ashley a really long time ago called Amazingly Ashley. I miss having it so when the chance came up to adopt this fanlisting, I jumped at the chance.

Title: Delightful
Subject: Melissa McCarthy
Opened: April 12, 2011
I have been a fan of Melissa since Gilmore Girls and I have followed her career every since.

Title: Yep
Subject: King of the Hill
Opened: September 18, 2011
I love this show. I watch it all of the time even though I have seen the entire series multiple times. It is just one of those shows I never get sick of.

Title: Born to Rock
Subject: Lane Kim
Opened: October 22, 2011
My favorite character from Gilmore Girls! I love her spirit, her spunk, and her heart. When I saw this was open, I had to apply.

Title: Versatile
Subject: Brittany Murphy
Opened: November 17, 2011
I just adore Brittany and she was taken far to soon. She was incrediably talented and I am lucky that snatch up this listing.

Title: Adorkable
Subject: Leonard Hofstadter
Adopted: December 2, 2011
My favorite character from The Big Bang Theory! I just adore him and his sense of humor.

Title: Class Act
Subject: Dakota Fanning
Opened: January 15, 2012
Dakota is one of my favorite actresses ever. She is so talented and I have enjoyed every single movie I have seen her in so far.